Cells at Work! was released on July 7, 2018. It’s a comedic anime that takes place within the human body and gives many facts about how each cell works in keeping the human body safe and healthy. While some of the episodes also focuses on the other type of cells, the two main characters are a clumsy, female red blood cell and a serious male white blood cell. 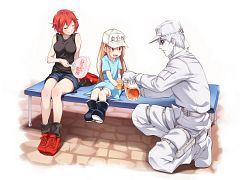 Before the anime was even released, many people were already making fun of it due to the popular 2002 show Ozzy and Drix. The reason behind this was the fact that both take place inside the human body and put as many biological facts as possible in each episode. While, I do agree that there are many similarities between both of these, they way they portray the cells, are completely different; especially since Cells at Work! is more comedic where as Ozzy and Drix was more dramatic in their episodes.

Now, there are some downsides to this anime, but it doesn’t really over power the cuteness and how well-made it is. The downside to this anime is how they stop to introduce each cell in all of the episodes. At first, it’s fine since you don’t know any of them, but then it gets to the point where it’s really tiring to hear some of the same introductions going through each episode repeatively; or, sometimes, they would stop the episode for more than 3-4 times just to give facts about certain cells or bacteria.

All though the countless (and sometimes repetitive) biological facts are tiring, the anime is very well-made. It’s really fun to watch. If you want to have fun while learning a couple of biological facts, I highly recommend this anime. It is also still on-going by the time I post this review. I give Cells at Work! four paws out of five due to how cute and funny it is and how creative the writers were when making each of the episodes. Anyways, that’s all for Cells At Work. I hope you all enjoyed this review, I really did enjoy watching the anime. Until the next article, keep your paws and bowls of ramen up, everyone. Nya! 🐾🐾🐾🐾