Wish Giver was released on Steam in November of this year. It’s a Chinese Indie RPG filled with puzzles where the protagonist- a wish giver- has finally started on working as such and accepts a job with a huge reward despite knowing that if she doesn’t get the wish by the aspirant done, she’ll be in debt by a huge amount. So far, there is only one available chapter which is why I’m doing a “first impression” rather than my normal review. 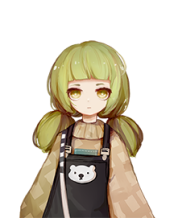 The first thing I noticed while playing this chapter, was the text boxes. If you play in the English version of the game, you’d see that there are many typos and mistranslations throughout the chapter. I don’t know if they were rushed into translating everything for the release of the game, but it really looks bad if you take the grammar into heart. I can slightly understand since the game was originally in Chinese, but I think they should’ve taken the time to revise their translation before actually releasing the English version. Also, some of the texts come out in Chinese when you interact with a few of the objects, such as the table in the study. I don’t mind since I know a bit of Chinese, but I’m not fully fluent and I had to look up some words in order to understand what it was saying to continue playing the game.

Now, the game has potential, and I wish they had added more chapters to have a fuller opinion on it. I think the mysterious ambiance was there, however it seemed a bit cliché, in my opinion. Anyways, I give Wish Giver two pairs of paws out of five due to it being the first chapter of the game. 🐾🐾

I hope they release the second chapter soon and revise all of the text boxes while fixing a few of the bugs within the first chapter before doing so. Anyways, until the next time, keep your paws and bowls of ramen up, everyone! Nya! 🐾